Degree vs. Experience: How important are degrees to employers?

Many career and job opportunities which were formerly reserved for university graduates are now accessible to people without degrees, reshaping the job market and ushering in new attitudes around the value of a degree.

Making hiring decisions based on experience, attitude, and value-match rather than focusing on specific academic achievements advances equality and opens up the playing field for talented individuals from a range of different backgrounds.

To find out how much a degree matters in securing the best jobs and the highest potential earnings, we analysed job posts on Indeed, Glassdoor and Payscale to find out the level of education required to access different types of jobs and salaries in the UK.

Salaries with a degree vs. without a degree

In the past, the qualifications a candidate held had a significant influence on the salary they could be offered by an employer. In some instances, wages could even be automatically capped at a certain level if employees didn’t have a degree - regardless of their experience, skill set, references, or desire to learn on the job.

However, our research shows the gap between salaries offered to people with and without degrees is in many cases marginal, and there are a surprising number of roles where those without degrees can actually earn just as much (or even more) than those with bachelor's degrees.

The table below shows the average salary available for candidates in 20 high-paying roles with varying levels of education, ranked from highest to lowest in terms of average salary across all degree levels. 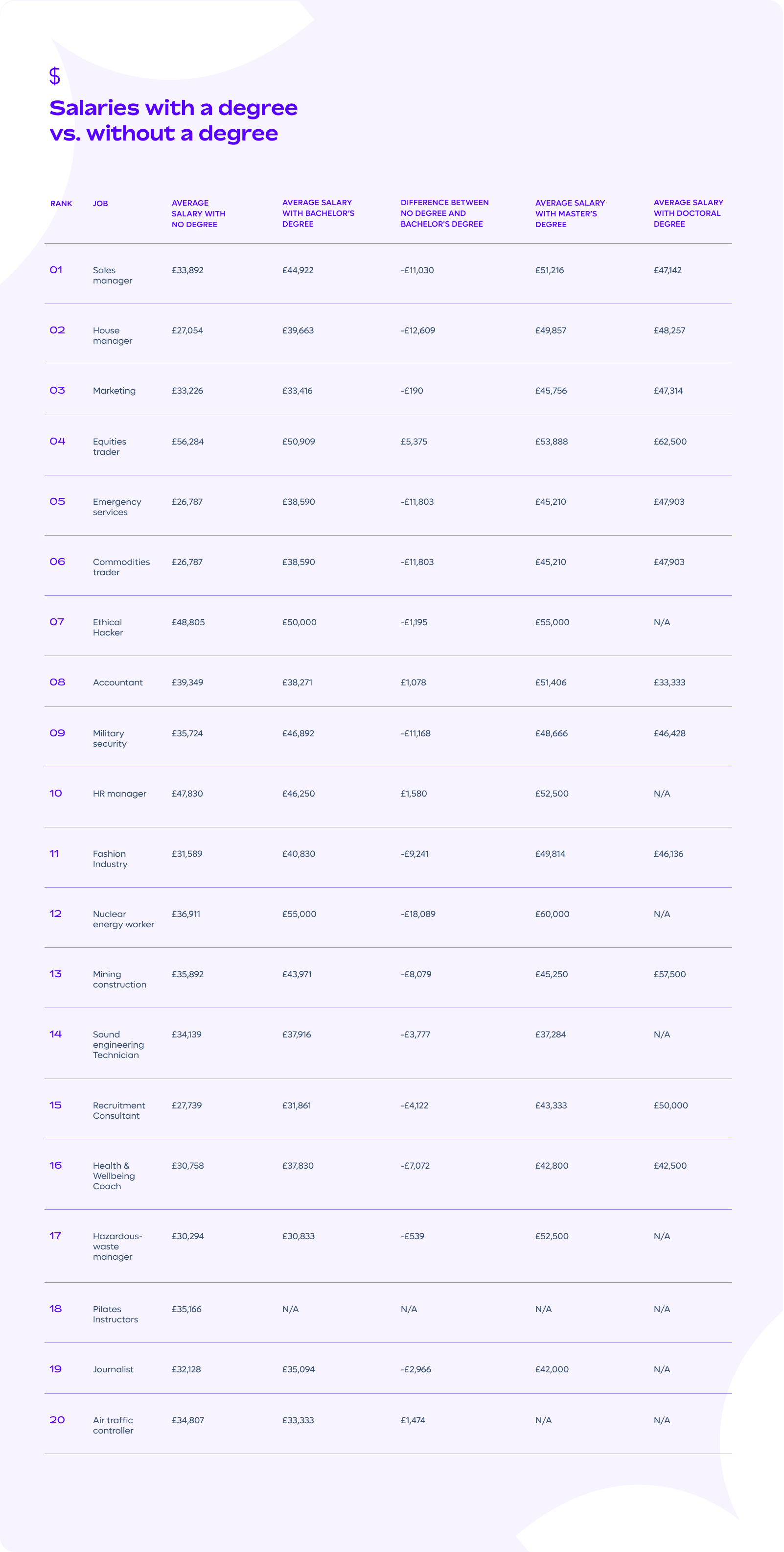 From our research, we can see that while academic achievements are still relevant for certain positions, the absence of a degree no longer serves as a barrier to higher paying jobs.

For example, the average salary for a marketing position requiring a degree is £33,416 and the salary for a candidate without a degree in the same position can be offered £33,226 - a difference of less than £200 a year.

For some, this could call into question the value of studying for a bachelor’s degree when the salary increase in comparison to those who do not have a degree is less than £200, especially when you consider how much time and money is invested into gaining a degree.

Some of the jobs roles we analysed actually offer a higher average to employees without a degree than those with a degree.

We found a similar pattern with commodities trader jobs, without a degree candidates can earn a salary of £51,862.75 on average but those with a bachelor’s degree earn less each year with an average salary of £49,868.

These trends indicate that on-the-job experience and non-university education is becoming more highly valued by employers. Job seekers without a degree can bring their own unique backgrounds and perspectives to prospective employers.

Our research found that the highest paying job you can get without the need for a degree is an equities trader, a role in the financial sector that involves buying and selling stocks or shares on behalf of a company to help them reach their financial goals. On average, this job pays a salary of £56,284.

The job paying the second highest salary for people without a degree is a commodities trader, which has an average salary of £51,862. This role is similar to an equities trader, except commodities traders buy and sell basic goods such as gold, oil, grains, and natural gas rather than stocks and shares.

In third place, we have ethical hackers. A job in which cybersecurity experts are required to expose digital security vulnerabilities on behalf of organisations and provide improvements to their security strategies.

The top ten highest-paying jobs you can get without a degree are as follows. 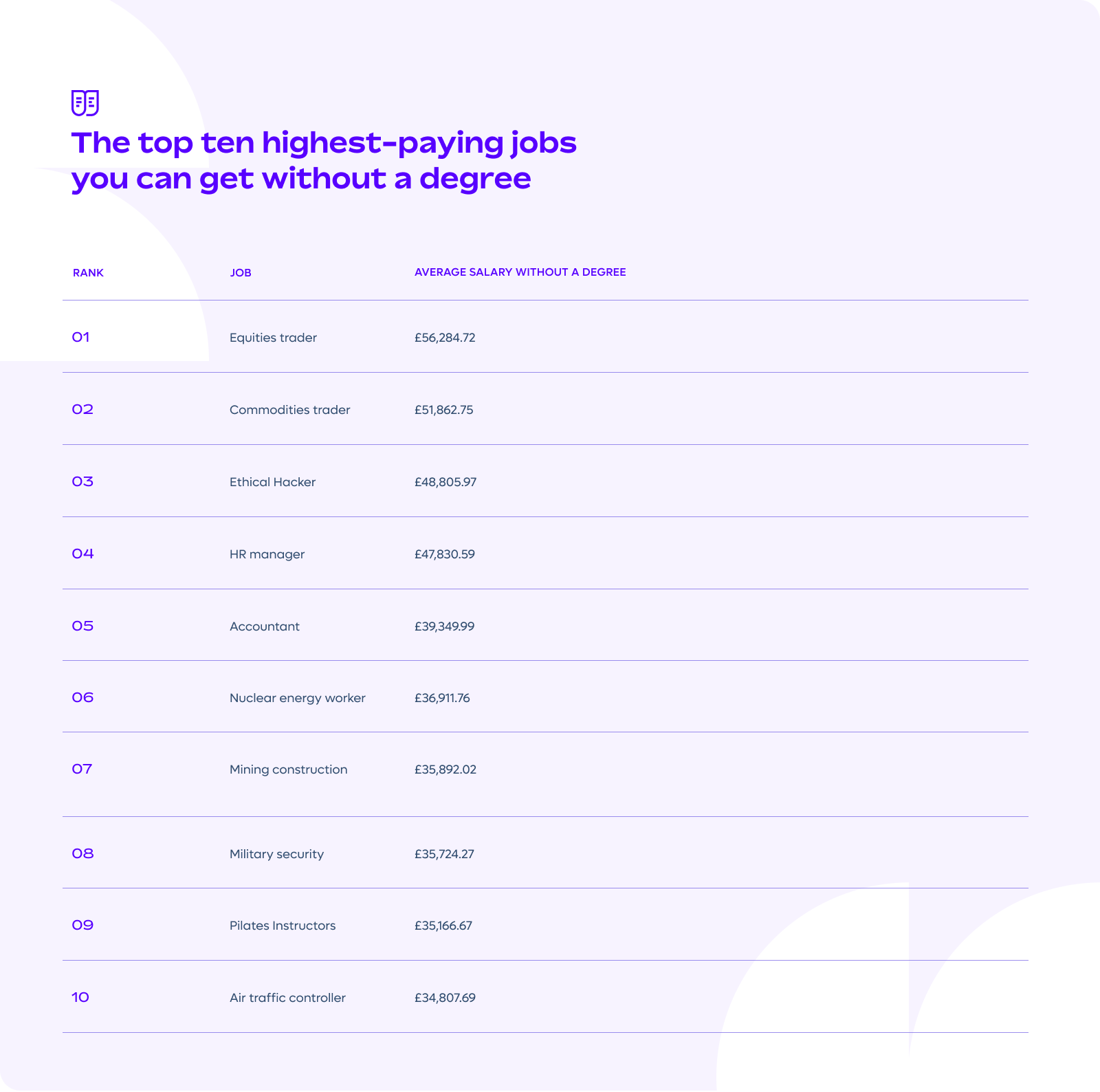 How many jobs does a degree unlock?

The table below shows how many jobs each degree level unlocks for each role.

Some of the roles we analysed do not have any jobs available that require degrees. These include Pilates instructors, firefighters and cabin crew members.

Benefits of focusing on more than just a degree

Our findings build a strong foundation for the argument that employers now value experience more than degrees, with some jobs not requiring any form of higher education at all and candidates instead being assessed on their experience, cultural fit within the company, and work ethic, amongst other key characteristics.

According to research conducted by the University of Hertfordshire and published by The Guardian, in order of importance, employers look for the following attributes when hiring graduates:

Removing unnecessary, outdated degree requirements prevents employers from missing out on a huge section of the talent pool and people without degrees have skills learned through on-the-job training. This creates greater diversity and engenders a more creative culture, leading to improved problem solving and idea generation, as well as facilitating skills and knowledge sharing.

Which job functions are best to outsource to international contractors?

Gomada and Remote create a recipe for happiness

How to hire and pay remote workers in Italy