Remote Talks is a series of video interviews with the brightest minds in remote work and global employment, hosted by Remote CEO Job van der Voort. This week features Sondre Rasch, CEO of SafetyWing and an expert on all things global contractors, insurance, and remote work.

And don't forget to subscribe to the Remote Talks podcast!

What does SafetyWing do?

Sondre: SafetyWing is building a global social safety net for remote workers and teams. We are for today in health insurance for nomads and also remote teams and workers worldwide.

Before this, I ran a platform called SuperSide. Today, it's still active, and we wanted to provide benefits for the freelancers on the platform, but we needed to do it in a way that was worldwide because they were spread out worldwide and nobody offered it the way we needed to buy it, which was global. But also we needed to make it easier to buy, ideally an API and flexible to turn on and off. That was sort of the problem discovery moment, and because I had previously worked with the Norwegian social safety net.

After trying for a year to get someone else to start this company with, I said, OK, someone has to build this. There's this infrastructure that needs to be built for remote work, and the social safety net is a big piece. That was the genesis for the company.

Why do you think no one had tackled this problem of benefits for global freelancers before?

Sondre: It is surprisingly difficult. Every company has their complexity. This one is it's the legal barrier to entry, roughly. And the financial barrier to entry as well. So just to get the product to market, you need to figure out licenses on multiple levels in all countries, to make a product that is simple.You also need the backing of an insurance company. And those kind of prove a big barrier to entry, because if you have a vision that is different from what existed before, you have to persuade these very conservative actors to go along with it. This is why we see so few startups in this area.

Are insurance services through SafetyWing for nomads or all remote workers?

Sondre: The person we work with is the remote worker, I think, the best description of it. Nomads is more a subset of remote workers.

If you think about it in the product adoption life cycle, I myself lived a bit nomadic in the sense of working remotely and living abroad. We started with that group, partly because we knew it well, but partly because as an early adopter, a lot of things nomads do today, everyone else does. A few years later, and we've seen that across multiple product categories, so it's a place to start. However, the user we have in mind in the long run is that most companies will be remote, and everyone who works will be part of an international workforce that has to have this global infrastructure to support. And that's what we're going to provide. The social safety net part.

Are there any areas of the world where you’re seeing particularly strong remote work expansion?

Sondre: Yes. We are seeing some countries that were early in vaccination grow. People I believe are eager to get out, and that's one area of growth we see. As for remote teams and remote workers, that's a pretty broad based growth where you see it. For us across countries and fairly spread out, we haven't been able to discern any particular patterns yet, with the exception that, of course, we see some of those countries that have a lot of people working only remotely, like the Philippines, being a bit ahead of the curve on their end. But this is a worldwide phenomenon. 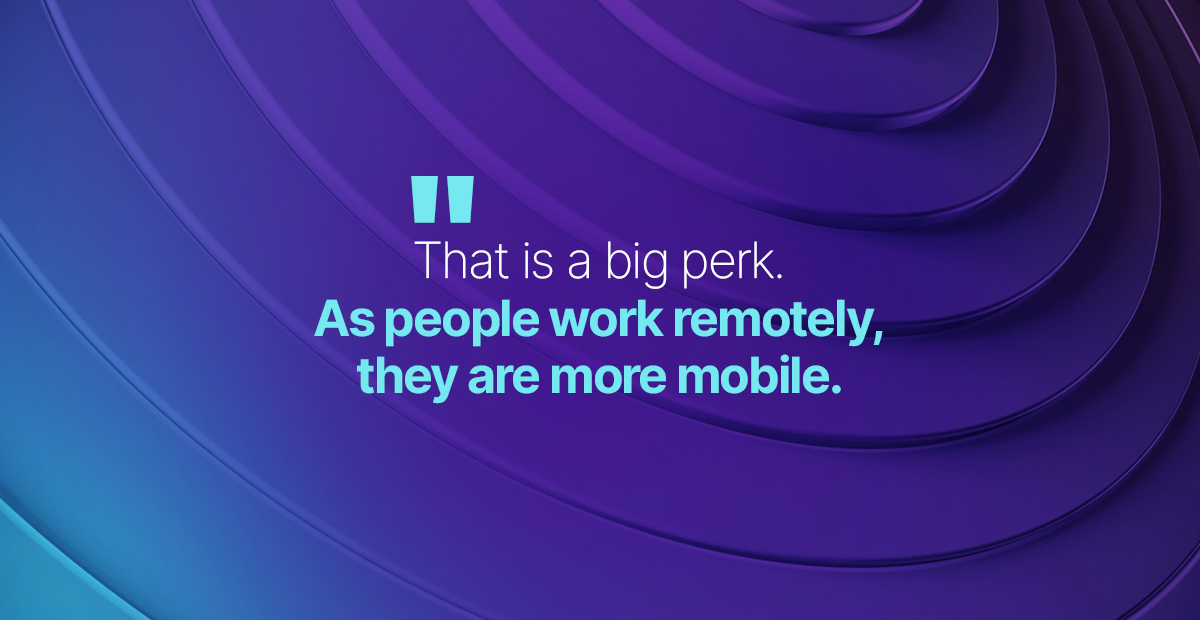 What happens when a citizen of one country moves to another, from an insurance perspective?

Sondre: So if you're in the US, even moving to another state would require you to undergo everything from the ground up, because all the infrastructure and the insurance are only legal in one state. And so it is between countries. Typically, we have built our policy from the bottom up to be global, so it's not an issue for us.

One of the benefits we can offer that's a regular kind of national insurance provider is that if you move or if you're abroad for a place of time, you have the same coverage as you do at home. You see some companies like Spotify. When they went remote, they said work from anywhere, and they're working to kind of set up the rest of their company to function in that way as well.

That is a big perk. As people work remotely, they are more mobile. If you work abroad, moving home to your family for parts of the year or to a summery place part of the year, that is now much more possible.

Learn more: Create your customized list from the best destinations for remote work

What kind of challenges do you experience with local governments?

Sondre: We both are in that area where we are deeply regulated in places and we want to make a simple product that works globally. So we have to deal with the differences between countries and, like you said, in insurance, it is also somewhat invented locally. There are differences between countries. There are some instances where you have to have it in one jurisdiction, like the EU, and then it's illegal in another, like the US, and that's sort of the edge case there.

We look for things that are legal across categories so that we can make something that is legal everywhere and that is broadly successful. It is possible, but it is part of our product development process, essentially.

Job: What is this one thing that is illegal in the US, but mandatory in the EU? Just very curious.

Sondre: It's a type of discounting.

How distributed is your own team at SafetyWing right now?

Sondre: We have over 50 on the full team, sort of 80 in total across 60 countries. So we're an extremely international team. It works out really well because, of course, a lot of the people grew up on the internet, and so there is this shared cultural reference that comes from that. But it is more important for our company to have a worthwhile mission and values. Because people have different contexts that they come from. But it is going really well.

We have a remarkable team. It is a lovely benefit to be able to hire from anywhere is that you can find these really rare people to work on your team. 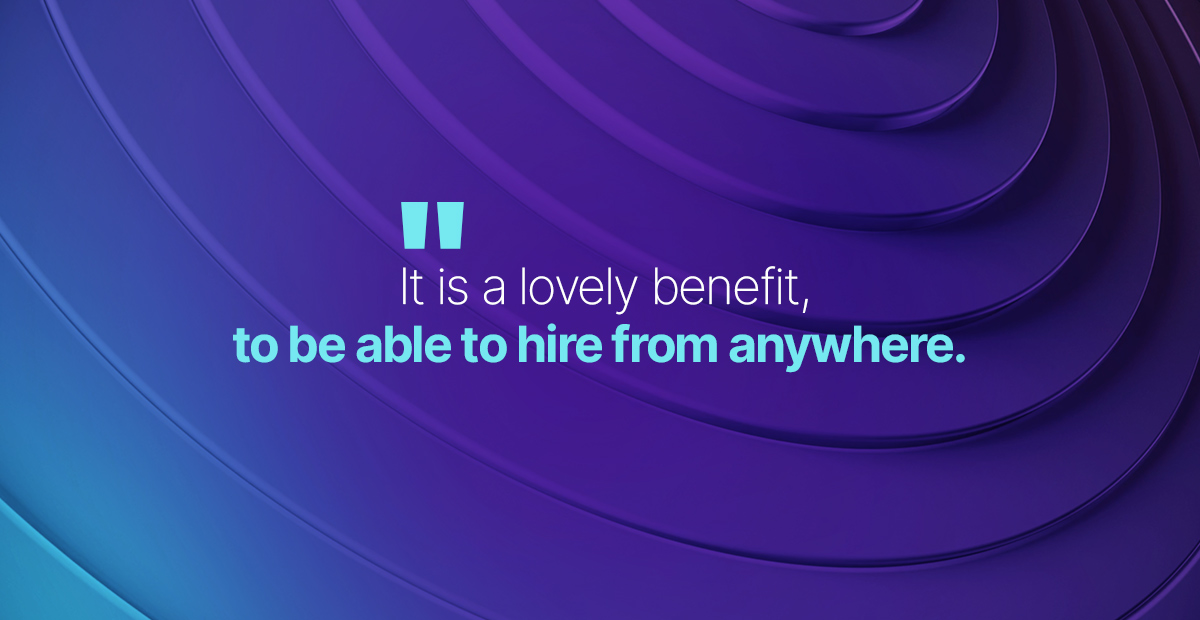 Has your team met in person before?

Sondre: Yes, so we would do team gatherings three to four times a year, with a break during COVID. We do have plans to resume in the autumn. Conditional, of course, of that being safe at the time. These things are a bit hard to predict, but that is a key part.

We do those for one week, and we have a great setup. It's not just team building activities. We try to put a lot of stuff that is the long-term planning in those weeks, and it's been a great way for us to work remotely.

What’s your philosophy on providing benefits to people in multiple countries?

Sondre: I'm pretty sure shortly it will be that you are expected to have the same benefits for someone you hire locally as internationally. We're in this odd situation where even among big companies, they think that they can have a completely different set of norms and rules and benefits for international employees. But that is definitely in the middle of shifting. That's roughly how I think about it. I do think that some benefits have to be reimagined. Some are a lot more useful when you do it internationally, and some are a lot less useful when you do.

Obviously, anything that is in the office becomes completely useless and has to be replaced, like things like office stipends. When it comes to big benefits like health and retirement, the issue is usually the international part. Are you able to offer the same worldwide?

Before you had services like Remote, almost everyone, even the most serious employees, would go with a contractor model. Part of that was because it's so difficult to do anything else. But now, with Remote’s service being started, it's starting to make that easier. And for serious employers at least to have a realistic option that isn't an impossible barrier of difficulty.

Learn more: Onboard your first global employee in minutes with Remote! 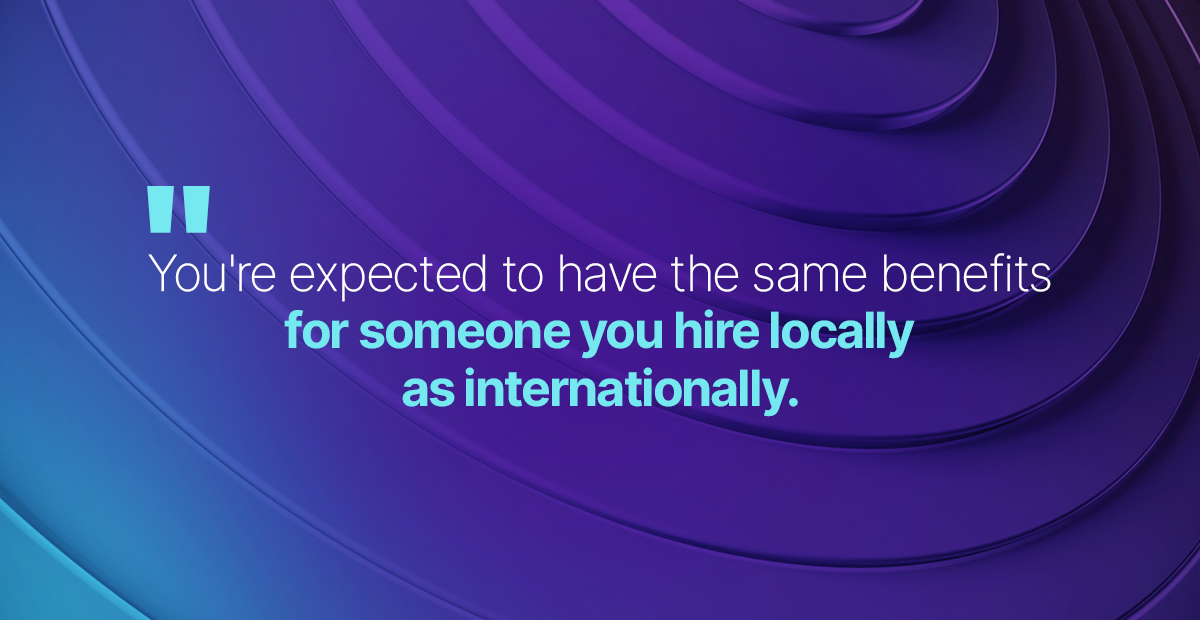 What has surprised you the most about the global insurance world?

Sondre: So many insurance policies are hard to read, and it has good reasons because, especially in common law countries, you have these phrases which have documented precedent, and the insurance policy is a collection of those. But the underlying thing it's trying to say is often very simple, and it could almost be said to be programmatic. Like there are events and then there are conditions and then there are limits. But you're finding yourself living in this history.

I also find that the entire insurance industry is one of the least digitized. It is changing, but there are significant parts of the insurance industry, both in the sort of distribution and product side which exist almost like the free software era, not just pre-internet, but like pre pre-digital. I wouldn't have guessed that. So that was a surprise to me. I would have guessed that it was behind, but not that it was the degree that it is. This explains a lot about what is odd about the insurance industry. It is just a very deep and broad need for renewal and becoming digital. But it's a very conservative industry, and they're very bound in rules and regulations, which has made it sort of a bit of a laggard. So a lot is going to change in the decade ahead.