Remote Talks is a series of video interviews with the brightest minds in remote work and global employment, hosted by Remote CEO Job van der Voort. This week, we welcome Jessica Hayes, VP of People at Whereby. Jessica is an outspoken proponent of smarter strategies for remote work compensation and collaboration, and her work for Whereby is helping to bring remote teams closer together.

Don't forget to subscribe to the Remote Talks podcast!

Tell us more about Whereby and the future of video communication in remote work.

What were your biggest priorities when you joined Whereby as VP of People?

Jessica: Everything we do is related to remote work because it's how we work. There's nothing that we kind of layer on later on. It's the way we think about everything that we do from a cultural, business, or a process perspective.

We kind of knew who we were, but then we'd never had to build a people team or a finance team or an ops team, because we had this big company that was kind of feeding us all of that stuff. So when we spun out, all of a sudden we had very sophisticated engineering, very sophisticated product, and zero anything else.

The company has a very good set of values and understanding of who they are, which I think is really nice. We actually did have quite a lot of like the ducks in a row in terms of structure and paperwork. I've started at startups before where your founders come over with a backpack full of paperwork and receipts and be like, here's all the things we have. So it wasn't that.

What was one of the first things you changed?

Jessica: For a remote company, we have a lot of work to do on asynchronous communications. We're still getting better at that. When I joined, we kind of famously had this general Slack channel. This is actually like a horror story, I think. You arrive at an office in the morning and everyone's like, “Hey, good morning. How are you doing?” And then when they leave, they're like, “All right, I'm off. See you.” Imagine that, all day, every day. That was the general channel.

See also: You should be working asynchronously (async) 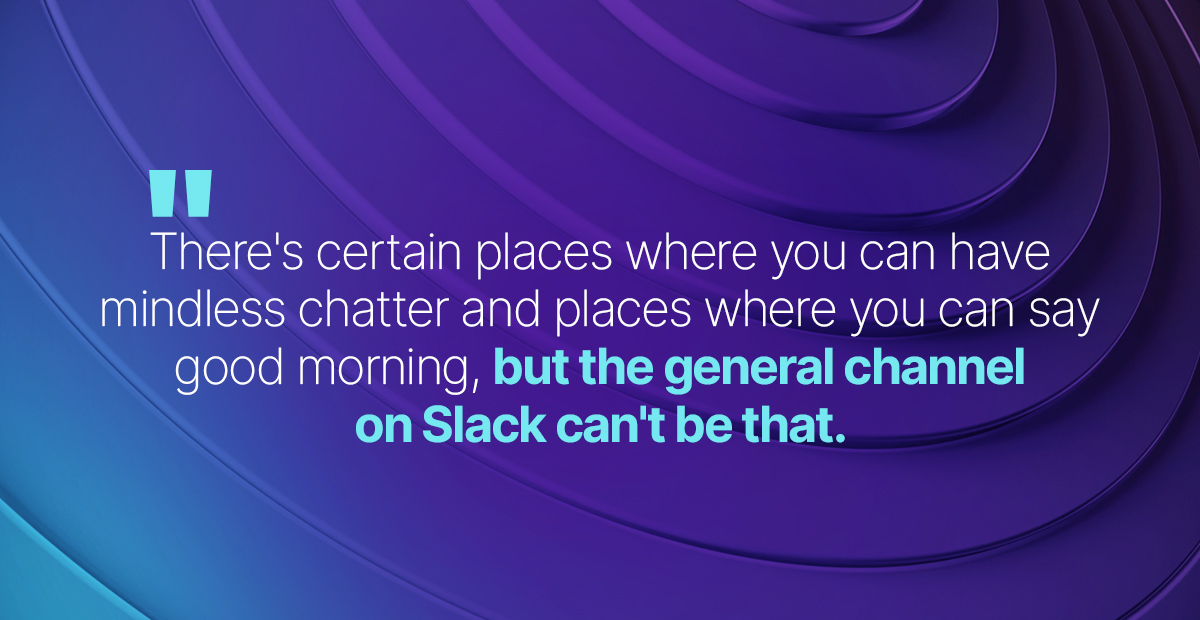 People in remote work talk a lot about overload on video calls. How do you handle that?

Jessica: I actually think we're pretty good at restraining ourselves from having video calls all the time. We know because we use the product so much, what is a good use case for a video call and when it's actually okay just to send somebody a text message or a Slack message. I think people kind of trying to make up for the absences of a physical office instead of realizing that there's some things you just don't have, and that's okay. You don't need to make a kind of artificial version of an office to be remote.

Job: That's an interesting opinion, I think, especially because there's a lot of products nowadays that try to replicate an office environment in many different ways. Have there been other ways that you try to address the lack of physical offers or like try to bridge whatever is missing when you're working purely remotely?

Jessica: There's different opinions about what an office may be in this context, right? I think there's the useful side of stuff that you definitely still need when you're remote. At the beginning of the pandemic, there was this big rush for everyone to replace everything like that they had in the “real world.” The next level of working remotely is realizing that you don't have to replace all those things.

What do you say to those who argue remote work leads to a weaker sense of community?

Jessica: I do hear this argument a lot. I've got a slight counter-argument to this. I think when I worked in an office, all of my social energy went into my work. I was there from 8 a.m. to 6 p.m. I had lunch with the people that I wanted to. If I was having a moan about having a bad day, I went for a walk with one of the people from my desks. If I had drinks in the afternoon, it was with people.

Job: I feel very similar to how you're expressing yourself. I do think there's a split between people that prefer one thing or another. Remote, we have many opt-in events. Like we have multiple bonding calls during the week. Sort of two different time zones. We play games to get a narrow opt-in. And what we see is attendance to them is never 100% of the people that are awake at that moment.

You'll find that the people that attend tend to be the same people, and it's not because other people don't necessarily enjoy that, or they don't enjoy their colleagues, or they don't get along with them. It's because, well, that's not how they prefer to spend their energy. Exactly.

What about hard conversations, like terminations and negative performance reviews in remote work?

Jessica: Yeah, I think they are different. I want to kind of step back from this question just a slight bit to say something that I think is really important for remote working. We talk a lot at Whereby about trying to avoid having a parental culture. We try our very best to share everything we make so that you can, as an adult, make fully formed decisions and be autonomous. I think most people hear that.

There are so many positives of building a culture that is non-parental, and it really, really works with remote working, because you don't need to be checking in on people. But one of the downsides of having a non-parental culture is you're not going to be there for people to check in on them when they're going through difficult times. So if someone is having a negative performance review, just because we're non-parental doesn't mean we won't have check-ins to kind of help steer them back on track, but we consider it to be more of a split responsibility to get back on track than maybe a more traditional workplace. We don't check in with you every hour of every day. I'm not watching over your shoulder.

See also: How to support employees who don't like working remotely

The really difficult part of this is if we have someone that really isn't performing and we are letting them go for some reason. If you're the kind of person that really requires an extra layer of assistance or guidance, that you can probably feel pretty isolated, I think at a lot of remote companies, because there's so much more responsibility on you to raise that flag.

Do you adjust your hiring processes to hire more people with remote-first skills?

Jessica: We do a practical project for every single role that we do. The practical projects always have an element of ambiguity purposefully baked into them. An example is in sales, one of our challenges, we have three emails. You have to read the email and say which one you'd probably reply back to as a lead, right. And they all could be right answers. It's not really clear which one you should go for, but you need to make the decision. One of the things that's a red flag to us is if someone comes back with a lot of questions, you can tell they're anxious about their ability to answer. That flags to us that we need to look further into their ability to deal with ambiguity and decision-making and isolation.

What about the other side of the equation, recognition on a remote team?

Jessica: The best recognition and reward you can give to anybody is an environment that treats them with respect, filled with other people that are very, very smart and help them learn. We put a lot of effort into making sure those two things happen above all else. 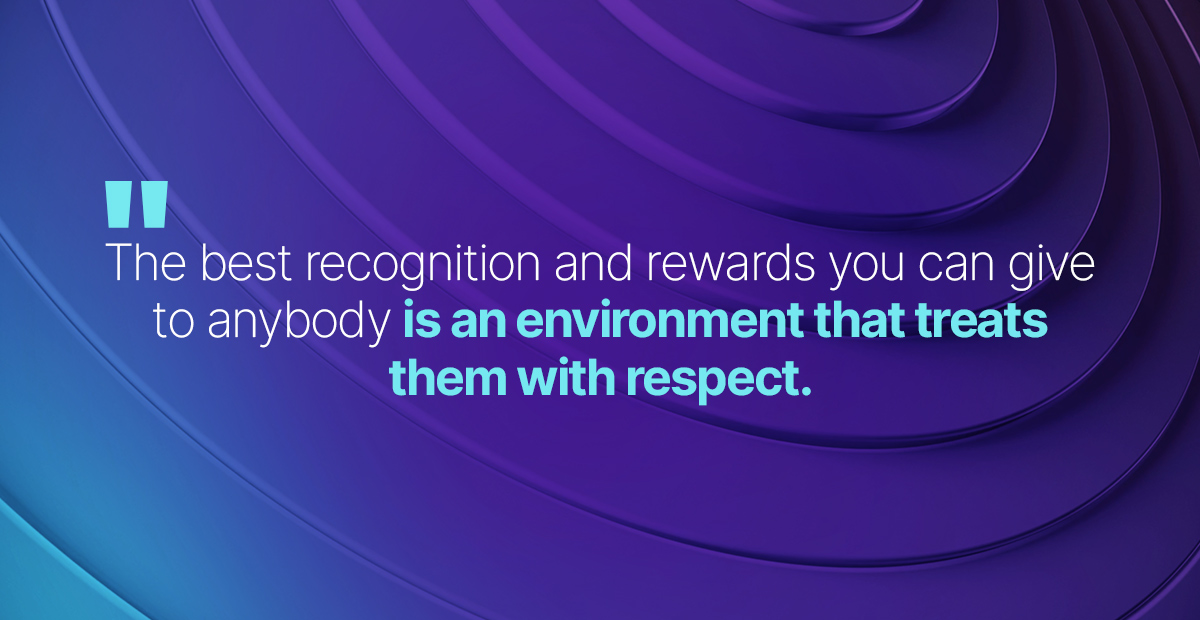 One of the things we do from the very beginning of working on the team is we say, you start on a full tank of trust. Everyone gets a card the week before they start with whatever money they need, usually about 2,000-3,000 Euros, to get their laptop, their home office set up straight from the first day, before they even start. We're saying to them, we fully trust that you're able to make the decisions you need to make to get your job done. I think that recognition is being non-retrospective.

You have some strong thoughts on remote hiring, can you elaborate on those?

Job: I read your blog, which is very good and very funny. You wrote a very interesting thing about how people tend to hire people that remind them of themselves, and this is of course straight against building a diverse company culture. How do you address this at Whereby?

Jessica: The blog post is extremely satirical. I think you can tell what kind of mood I was in when I wrote this.

One of the things that frustrates me about hiring is when people fail to recognize that you need to make operational decisions to make hiring work well. It's kind of a bit boring, maybe a bit administrative, a bit operational, but being consistent in the rules you make around how you source and not treating referrals any differently or with any kind of special privileges. Making sure that you're having practical tests for every project. Making sure you're paying people for practical pieces of work that they're doing. Making sure that you're reviewing them all and getting good quality feedback back all of those things.

Whenever someone comes to me and says, “We're struggling to hire diverse candidates.” I don't think there's any magic bullet on that. Do the things that you're supposed to do operationally really, really well. And then I promise you'll see massive gains.

The most controversial topic in remote work: how do you decide what to pay people?

Jessica: We have four stages in our compensation calculator. The first one is a location-based first step. We actually only have two regions. We have the US and then everywhere else in the world. So we pay everyone else in the world as if they were in London, and we pay everyone in the US as if they were in Austin. We will make exceptions if you're in the Bay Area or in New York City, but we would have to look at them on a case-by-case basis.

See also: How to calculate compensation for remote employees

The next step, we look at which level you're at. We get all of our data from the Economic Research Institute, which is a very good data set in my opinion. We have a calculator that gives us an outcome that says, well, if you're a level two engineer based in Madrid, you should roughly be on X number. Then what we actually have is discretionary room above that to a certain percentage where managers can make a decision without triggering any kind of check-in. Because we don't want to have a cap on how much we pay people. We see our compensation framework as a set of guidelines.