Remote Talks is a series of video interviews with the brightest minds in remote work and global employment, hosted by Remote CEO Job van der Voort. This week, we welcome Mac Reddin, founder and CEO of Commsor, a company tackling a unique challenge: building community and empowering people to nurture those communities.

Don't forget to subscribe to the Remote Talks podcast!

For people who don’t know, what does Commsor do?

Mac: It's kind of like what HubSpot is to a marketing team or Salesforce is with a sales team, we are building for a community team. It's the idea that community is this whole network of engagement around companies. It's not just their Slack channels or their forums, but it's all these touch points. Social media, email newsletters, events/forums. And the core of our product is taking all that, tying it together, giving community teams a system of record.

Mac: I think that the big difference [between community and marketing] is that community is all about breaking down barriers and enabling these many networks to exist. Traditional business has been very silent, right? It's like, I want to sell to you. So I reached out to you directly, or I want to market to you, or I want to support you. Whereas community is actually enabling that network to engage with each other and actually build relationships with each other.

When done, right, it actually can elevate the product or the company into something bigger. I think you look at Salesforce with their Dreamforce committee, the trailblazers. That is so much more than Salesforce, the product. And that's because they were able to bring people together and find those shared connections and give people a reason to come together. 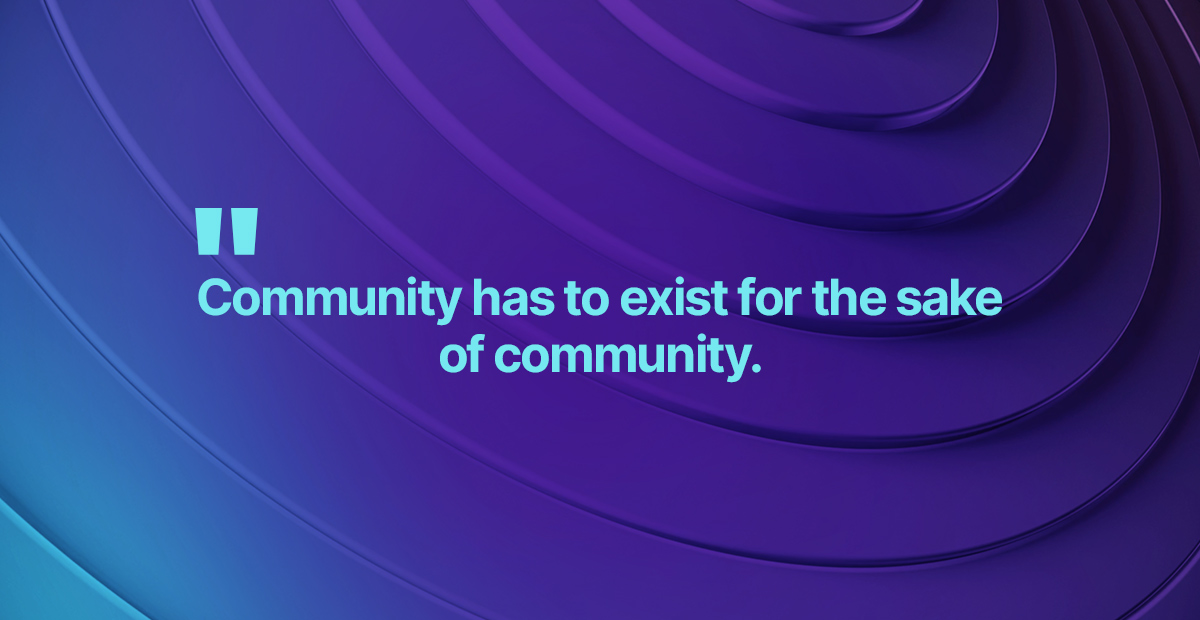 Community has to exist for the sake of community. I think historically, companies have made the mistake of allowing community to get co-opted by marketing or sales or support. And people can see through that.

If you’re building a company, how do you even get started with community?

Mac: Historically it happens accidentally, sometimes. Companies have good products. People gather around naturally. You look at things like Webflow or Notion, people just gathered around them and started sharing Notion templates and things like that. That wasn’t something that Notion set out and did intentionally, it just kind of happened. And now they can build intentional community from there.

Why do people want to join your community? And why do they want to stay there? What value are they going to get out of it? One of the big differences is it’s unlike traditional social media marketing, which is very one-directional and very consumption-based. Community members have to put in to get out. I think a lot of startups start with putting their customers in a Slack channel and then they try to figure out how to go broader than that.

What does the future look like? How are organizations going to react to the rise of the community?

Mac: We're seeing VP of community roles in a number of companies that reach out to us on a weekly basis. They're like, “Oh, we should have started three years ago.” It's one of those things that takes time. The best time to start a community was yesterday, the second-best time to start is today.

It's almost like this evolution of community, where in different companies, community reports to different departments. No one really knew where it lived. Now it's maturing into its own department. I actually think it's going to go one step further and actually start to sit around all those departments and be a first touchpoint rather than a last touch.

Community, unlike any other function in a company, has the ability to touch every other function. It's hard to define. The goal of community is kind of everyone's goals and no one's goals at the same time. Community can help drive leads and sales. It can help reduce support costs. It can help increase customer success. It can help drive brand awareness and thought leadership. It can drive hiring. We've hired people from our community. It's a multifaceted thing that can sit around the entire company rather than just being a piece that sits internally. 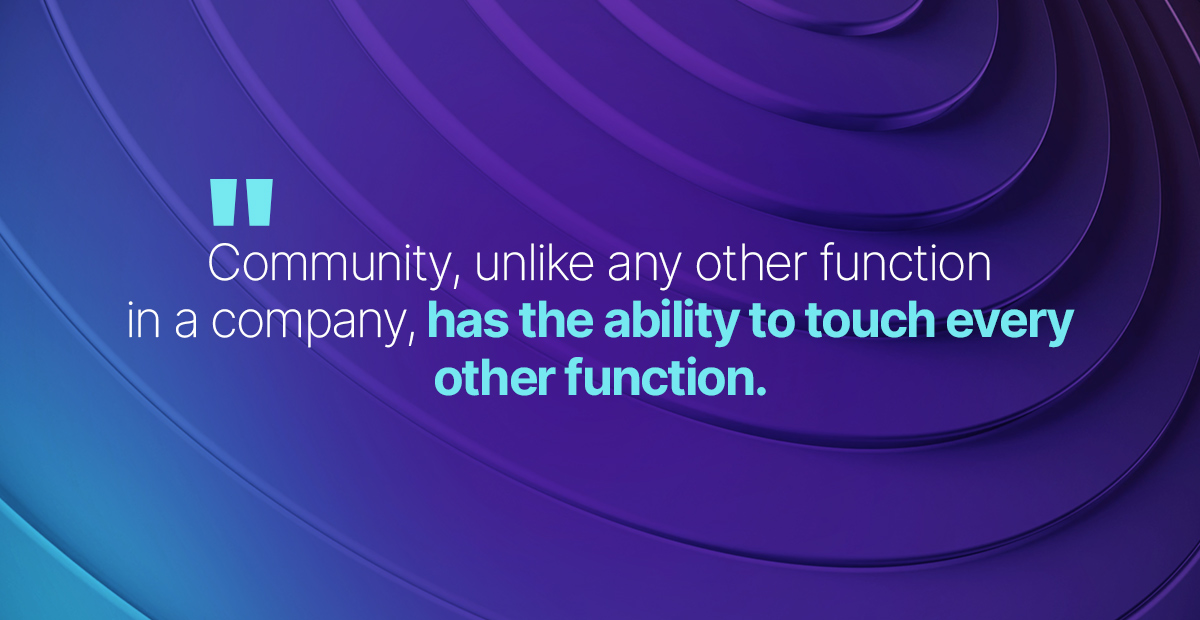 Where is a community supposed to live? Where does this all happen?

Mac: That's the mistake of so many companies right now. They're like, “We are a Slack community,” or, “We are a Discord community.” They take the platform their community is on and they apply that to the identity of the community. But community is not a platform. Community is the relationships and the networks that are built, and that happens intentionally or not, on a platform or not. There's that ongoing debate of community versus audience. And I actually think that they kind of almost blur together if a company does community right. They kind of become one.

Job: Should companies have community sections on their blogs? Many companies have a content strategy. Should we make it easier for people to be active about that? Or should we just leave that where it is, as in Twitter or everywhere else?

Mac: That's a personal decision that has pros and cons. Companies have sometimes struggled with adopting community. Sometimes companies are afraid about labeling, enabling customers to talk to each other. What if someone talks about our competitor? What if someone talks about us? What if someone says something mean? Well, they're going to say that anyways. They may or may not say it to your face or in a place you can actually respond to it. If you make it impossible for someone to say it in a place where you can converse with them about it, that's going to be that much harder to deal with.

When you deal with those things in public, people see. Someone had a problem. The company dealt with it really well. You can turn a negative into a positive when you enable it to happen through the community versus trying to keep it behind closed doors.

How do you think traditional companies are dealing with these changes?

Mac: I think part of their fear is that you can't really control it. Like you don't have power over it.

See also: Mastering work-life balance when you work from home

My short answer to that would be, based on the companies that have been reaching out to us and talking about community, I would say they're less afraid now than I would have expected. I think a year ago when we made the pivot, originally we were trying to talk to companies. They were like, this is dumb. Like, “Community's not our problem.” And that tone has changed a lot in the last year.

Salesforce is like the most shiny example of a kind of big, boring, enterprise company. And they do community really well in a way that people get excited about. If Salesforce can get people excited about being part of their community, any company can do it.

What makes someone a ‘community builder?’

Mac: Oh man, that's the million dollar question. There is no official training for community managers. I think most community managers I've spoken to fell into it accidentally. A lot of us started in the gaming world where you're building online. I was doing Skype groups and online forums. And it was Discord servers for various games. So there's a lot of people who start as community builders from a hobbyist perspective. Like people who start a subreddit and they're managing it that way. There's also a lot of people that come from a support or success marketing role that just kind of, once again, fall into it. 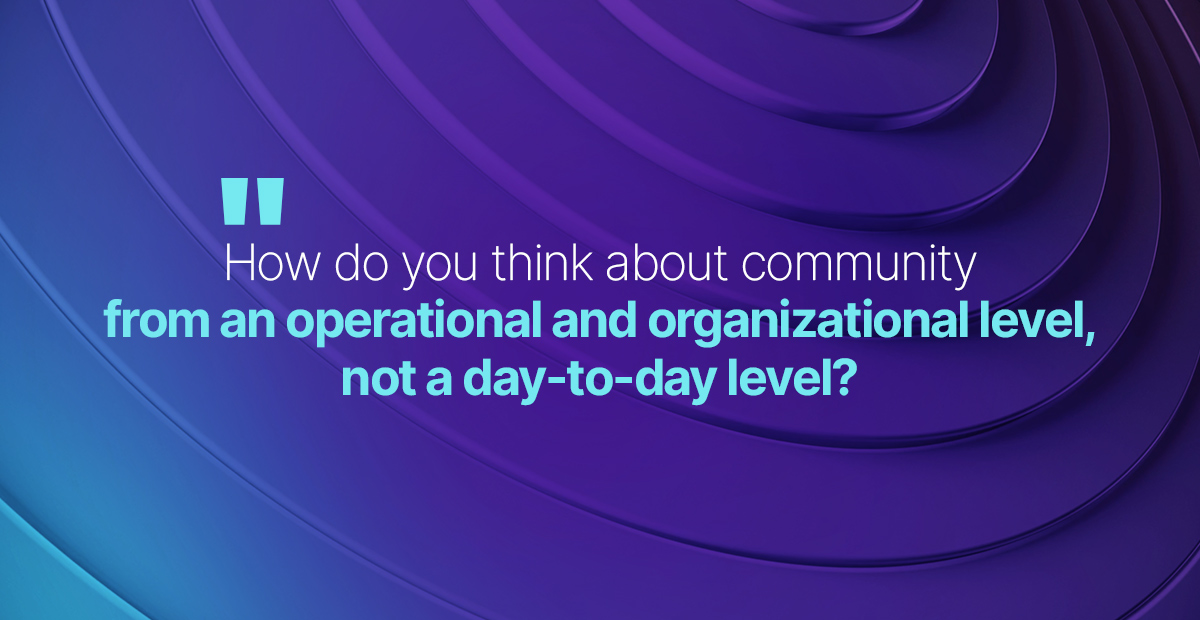 It's a generalist role right now that is starting to change. We are starting to see some specialization in community roles where it's not just community managers. You actually have community marketing, community operations, and things like that. But it's because it's such a hard role to define sometimes.

A lot of companies that misuse the term “community manager.” That's more of like a Twitter, social media manager, but I saw a role the other day that said community manager. And then you read into it, this is a growth marketer role. You're just calling it community manager. So there's a lot of evolution happening right now. I think it's kind of similar to revenue ops, right? Like revenue operations was not really a role, three to five years ago.

Does every company have or need a community?

Mac: You don't need a community just because it's like the hot new trend. You didn't need to put machine learning in your product five years ago, just because every VC said you should. So I think it's this idea of, they have to be ready to commit to the long haul.

What is still lacking in the community space? What needs to happen next?

Mac: There's a lot of the misunderstanding of what a community role looks like. We're no longer in the days of a VC-backed startup paying a head of community $50,000 a year to live in San Francisco. That luckily is no longer here, but there's definitely a lot of companies still undervaluing community and underappreciating the time it takes.

How do you think about community from an operational and organizational level, not a day-to-day level? We're doing a lot of focus there because community managers have been talking amongst themselves for 10, 20 years about how people should care about community. But at the end of the day, if it doesn't come down from the top as well, it's going to have limited impact. So we're doing a lot of work there.

We actually launched C School, which is a 12-week program to actually train people to be community managers. Because as I mentioned, you can't get a college degree in it. And there's books, and articles, and podcasts, and YouTube videos, but there's not an actual certification program. So we're working on building that out.